In March 2019, Cyclone IDAI hit Southeast Africa. Billed as one of the deadliest tropical storms to hit the southern hemisphere, the cyclone pummeled into Mozambique, Zimbabwe and Malawi. The devastating winds (up to 120kph), heavy rains and the resulting flooding and landslides left dozens of lives lost, thousands injured and a trail of property destroyed. 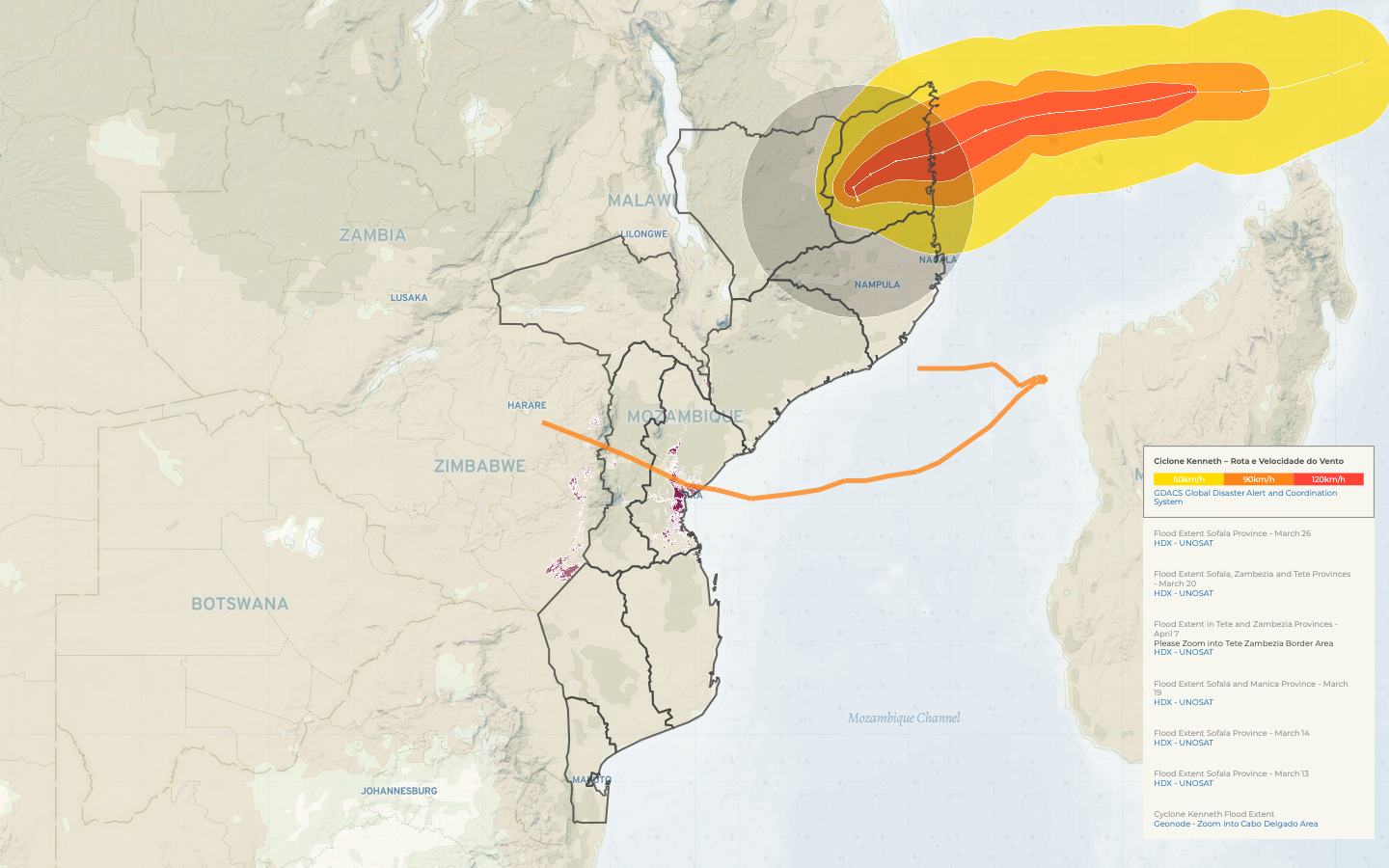 Cyclone Idai Response Platform showing the cyclone path and the extent of flooding in both Mozambique and Zimbabwe. Courtesy of Ona, MapAction and OCHA (HDX)

In emergency contexts, the need for rapid and coherent responses amongst the different players is crucial. This is especially so for government and UN cluster agencies responsible for coordinating these activities. These agencies need to have access to accurate and real-time data across the different response activities. However, the inevitable split approach to data collection and visualization amongst the various actors creates siloed information. This limits data sharing between partners and with coordinating agencies, making them unable to cross analyze information.

To help address this problem for UNICEF (as a cluster lead) and to support the Government of Mozambique’s capacity to respond to this emergency and sustainably prepare for future events, UNICEF contracted Ona to help define, build and deploy a solution. Ona started by sending a team to Mozambique and Zimbabwe to help with on-the-ground planning and coordination and to better understand the data needs. Within days, Ona’s team established powerful, map-based information management portals that would prove critical in providing data and maps to support emergency response teams in the two countries. The platforms, the Multi Agency Cyclone Idai Response Platform, the Government of Mozambique’s National Institute of Disaster Management (INGC) and the Idai Response Platform in Zimbabwe, are based on an open source mapping tool called Gisida, which Ona built with DFID support, and Ona’s powerful data enterprise analytics platform, Canopy. 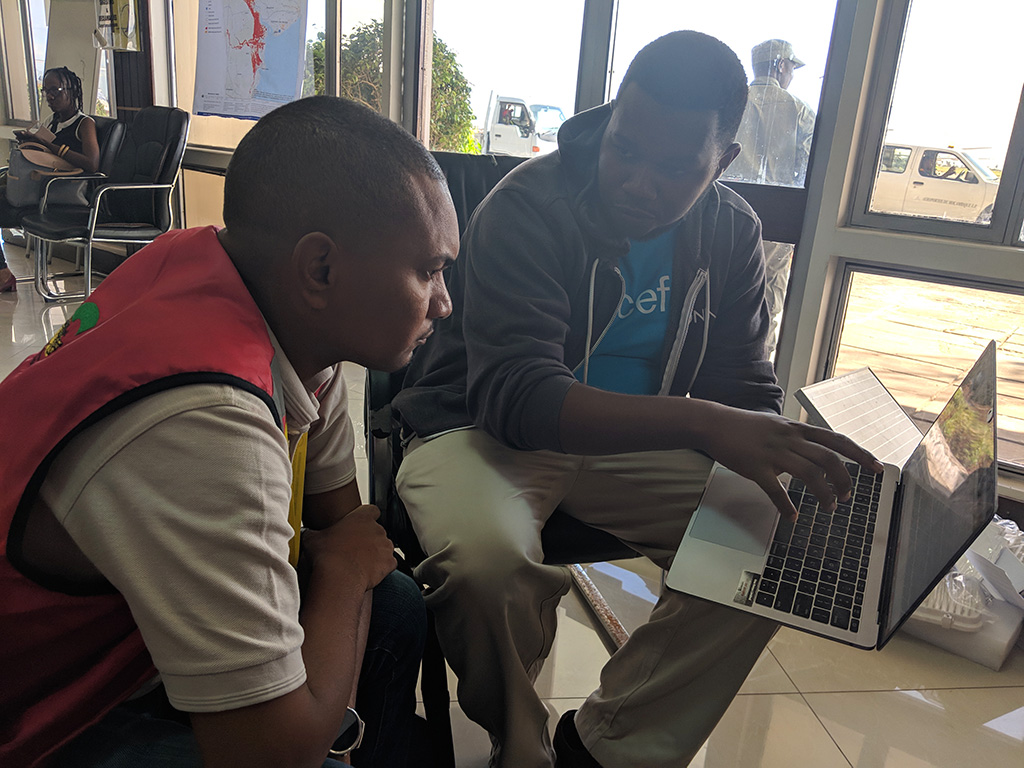 Director of Client Solutions, Erick Ngwiri taking the Deputy Director of the INGC through the information portal.

These platforms enabled the emergency response team to create data visualizations from multiple disparate systems and data collection processes that are often siloed and rarely shared fast enough to help coordinate response efforts. For example, using the platform the team was able to map all key infrastructure services, including functional energy posts, water points and other essential infrastructure, against where the flooding occurred. The team was also able to map population census data (gathered from the government) to help emergency response teams assess how many people were affected, and in which areas. Furthermore, users of the platform were able to assess current road access conditions (based on WFP data), and visualize data from rapid and aerial assessments (performed by OCHA and ICRC). The teams on the ground were using data pulled from these assessments and from OCHA’s Humanitarian Data Exchange through Ona’s Canopy and visualized in real-time, easy to use dashboards and maps.

4W (Who, What, Where and When) Dashboard for Zimbabwe’s WASH cluster which UNICEF is lead agency

Ona’s in-country team of Erick Ngwiri (Director of Client Solutions) and Darlene Kwamboka (Data Analyst) worked closely with Nelson Rodrigues (UNICEF Mozambique) and Sean Blashcke (UNICEF Regional Office) in Mozambique, as well as Shepherd Mutsiwegota, Oscar Tapera and Akshay Sinha (UNICEF Regional Office) in Zimbabwe, to establish key data sources and systematically worked to build these systems. The work involved identifying the systems through which data can be pulled, including through live API connections to existing systems like OCHA’s KoBo and Ona Data in real time, connecting to data sets in Google Sheets documents and static datasets uploaded in HDX. Ona’s technical team then worked to pull this data into the dashboards and maps and dynamically visualize the information and layers needed.

Working initially to support the Government of Mozambique’s INGC and UNICEF, the team’s efforts led to wider adoption with the broader response and coordination teams adopting the tools and using them to plan the response. The overwhelmingly positive response from the emergency teams, the adoption of these tools both within the government (through INGC) and sustained strong interest from OCHA have helped validate this approach in emergency contexts. The grand vision for Ona moving forward is to create a standardized way to create, publish and share data visualized in maps and move away from siloed PDF outputs. We are hopeful that this will catalyze the dynamic sharing and use of data across multiple agencies as they plan for emergency responses in real time.